A Surprising Cause of Many Midlife Issues

by Dan Reinhardt | Health and Energy

In the second half of life you may be surprised to find yourself struggling. You haven’t dealt with issues like this before; but here they are, staring you right in the face:

It’s when these happen simultaneously that you can feel overwhelmed; maybe even wonder if you are emotionally losing it, or are under a spiritual attack.

One hundred years ago, your doctor might not have been able to diagnose your problem, but he knew how to treat it. Dr. Albert S. Gyorgi (1893–1986), the physician who discovered vitamin C, wrote: “When I was a medical student, iodine in the form of KI (potassium iodide) was the universal medicine. Nobody knew what it did, but it did something and did something good.”

Now we understand Iodine’s role in the production of thyroid hormone, which regulates just about every bodily function. It’s literally the engine that drives your body.

The World Health Organization (WHO) estimates over 2 billion people may be iodine deficient worldwide – a crisis especially for children who suffer brain damage without it. Even with iodized salt, iodine deficiency/thyroid disorders are on the rise in North America.

Why are we iodine deficient?

So eat your (sea) vegetables!

Kelp is a sea vegetable that drifts about in the ocean and absorbs iodine. A stick of dried kelp can be cooked with rice, soup & oatmeal. It softens legumes such as beans and lentils. You can throw it out when the food is cooked or, as the Japanese do, when the water comes to a boil.

Thanks to Miso soup, kelp and other seafoods, the Japanese typically ingest at least 50 times as much iodine as the average North American. They also have lower rates of thyroid disorders and most cancers. Iodine is stored in the prostate, brain, ovaries, thyroid and breasts – the locations of some of our most common cancers. Think there might be a connection? 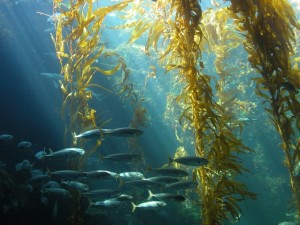 When it comes to your health concerns, keep on asking, seeking and knocking – then listen to whatever the Spirit directs you to do. Maybe you can still get the squeal back in your tires. Why burn oil when you could burn rubber?

Blog by Verdeen Bueckert, a Registered Nurse and CREST Board member, who herself has recovered from several of these issues. Post your question here, and she will be glad to answer.